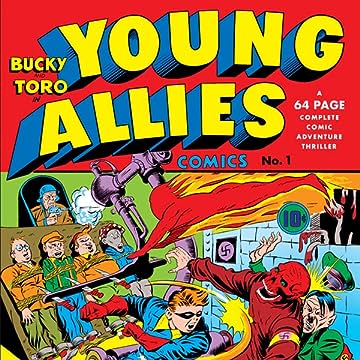 Collects Young Allies (1941) #1-4. The Young Allies, comics' very first boy-adventure team, leap into four-color action once more with their debut MARVEL MASTERWORKS volume! Super-hero sidekicks unite when Captain America's pal, Bucky and his Sentinels of Liberty team up with the Human Torch's protégé, Toro, and take on the Axis! And they won't waste a second getting down to business. Right from issue #1 they take the fight straight to Berlin and, rest assured, the Red Skull, and even Hitler himself, won't be walking out of this one without a bloody nose. Next up, the Black Talon returns from the pages of CAPTAIN AMERICA COMICS to terrorize the Young Allies, or maybe that should be the other way around? There are 5th Columnists, Nazis, Imperial generals, spies, and action galore in each of these Timely classics.