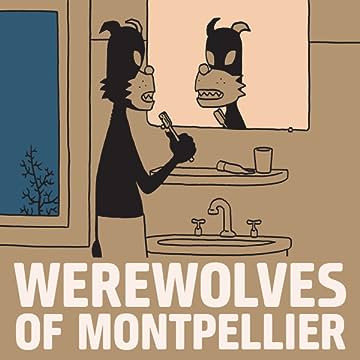 Named to NPR, Las Vegas Weekly, Graphic Novel Reporter, The Casual Optimist, Comic Book Resources, Attentiondeficitdisorderly, Hypergeek, and Robot 6's Best of 2010 lists.Sven, a semi-aimless Scandinavian artist who has ended up in Montpellier, France on a futile romantic pursuit, enjoys nocturnal raids into other people's homes, disguised as a werewolf. The way he figures it, the disguise will give him an extra few moments' advantage vis-à-vis any startled home owner if things get ugly... but he hasn't taken into account the existence of a society of real Montpellier-based werewolves who do not take kindly to this new pretender. So while Sven spends his days playing chess and poker with his friends, sketching his way through his picturesque chosen hometown, and coping with romantic dilemmas - both his and those of his best friend, the Breakfast-at-Tiffany's-obsessed Audrey, who has girl troubles of her own - little does he realize that a genuine threat to his life, and for that matter his humanity, is closing in on him. Werewolves of Montpellier is a lycanthropic thriller, a romantic comedy, and an existential drama - beware the full moon! "Another werewolf story to warm the cockles of your heart!" - John Landis