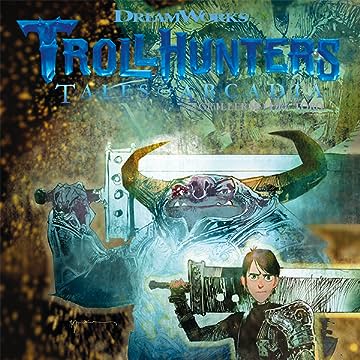 From Guillermo del Toro, Universal Brand Development, and DreamWorks Animation Television comes a graphic novel with further adventures for teenage Jim Lake, Jr., and the trolls from Netflix's original series, Trollhunters! Trollhunters executive producer and writer, Marc Guggenheim, and How to Train Your Dragon graphic novel writer, Richard Hamilton, work alongside Trollhunters creator and executive producer Guillermo del Toro to co-write this companion tale to the Emmy-winning Netflix series! When fifteen-year-old teenager Jim Lake, Jr., stumbled upon a magical amulet that gave him a powerful suit of armor and the title of Trollhunter--defender of the good trolls--he began a journey that no human had ever taken. With his friends he has been discovering the mysteries of the Trolls that live beneath his hometown. The secrets of the great troll warriors of the past are crucial tools for the new Trollhunter, and the time has come for Jim to appreciate the battles of Kanjigar the Courageous, who through his own struggles, triumphs, and failures lead the trolls after the Battle of Killahead Bridge through unknown territory, across oceans and continents, and past fearsome foes! With his friends by his side, Jim continues the fight against the Gumm-Gumms and their allies!