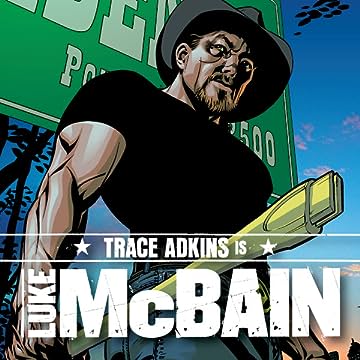 "Back to Eden" Part 1 of 4 Country superstar TRACE ADKINS is LUKE MC BAIN, a man who makes the hard decisions. He doesn't say much, but he'll kick your ass if you get out of line. He's returned to his Northern Louisiana hometown to settle a score, but the town has changed, and the people he grew up with need his help. God help anyone who gets in his way. Trace Adkins has sold over 10 million albums. He won "All-Star Celebrity Apprentice." You've heard his voice on "King of the Hill." But you've never seen Trace Adkins as LUKE MC BAIN -- an American hero for our times, in a story of right and wrong in the tradition of "BILLY JACK" and "WALKING TALL". Written by David Tischman ("TRUE BLOOD", "BITE CLUB") with artwork by Kody Chamberlain ("30 DAYS OF NIGHT: BLOODSUCKER TALES", "PUNKS") and covers by Brian Stelfreeze ("BATMAN: SHADOW OF THE BAT").