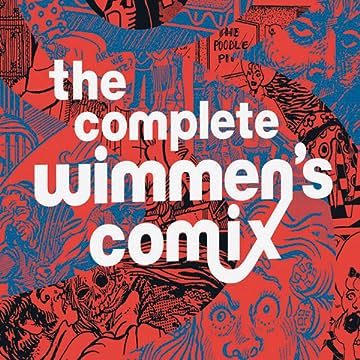 DISCLAIMER: graphic sexuality
In the late '60s, underground comix changed the way comics readers saw the medium ― but there was an important pronoun missing from the revolution. In 1972, ten women cartoonists got together in San Francisco to rectify the situation and produce the first and longest-lasting all-woman comics anthology,Wimmen's Comix. Within two years the Wimmen's Comix Collective had introduced cartoonists like Roberta Gregory and Melinda Gebbie to the comics-reading public, and would go on to publish some of the most talented women cartoonists in America ― Carol Tyler, Mary Fleener, Dori Seda, Phoebe Gloeckner, and many others. In its twenty year run, the women of Wimmen's tackled subjects the guys wouldn't touch with a ten-foot pole: abortion, menstruation, masturbation, castration, lesbians, witches, murderesses, and feminists. Most issues of Wimmen's Comix have been long out of print, so it's about time these pioneering cartoonists' work received their due.