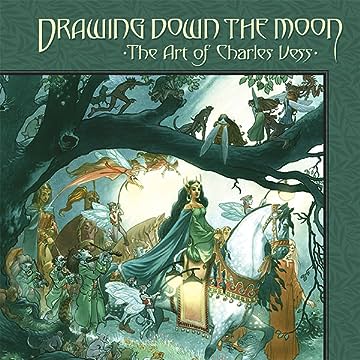 The fantasy art of Charles Vess is acclaimed worldwide, his rich palette, striking compositions, and lavish detail second to none. Vess has created memorable works for such best-selling fantasy authors as Neil Gaiman, Susanna Clarke, Charles de Lint, and George R. R. Martin, as well as a who's who list of publishers and clients. His art is both breathtakingly singular while recalling the golden age of illustration, when paint and brush were the vessels that carried readers to distant lands, bygone ages, and realms of the imagination. Foreword by Susanna Clarke, best-selling author of Jonathan Strange & Mr Norrell. "The reason that Charles Vess draws such astonishing things, such beautiful things, and such strange things so very well is simple. He draws what he sees."– Neil Gaiman. Please be aware that this art book has not been optimized for small-screen devices. Unlike our comics and graphic novels, it does not include the "panel zoom" feature. However, as always, our app users can utilize the "pinch-to-zoom" feature of their device to enlarge the text and images.