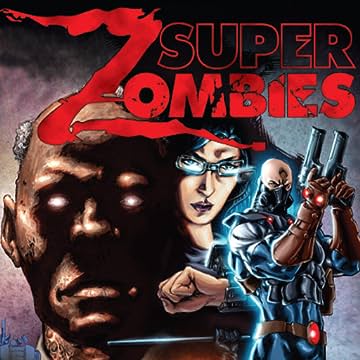 1. Super -Zombie [soo-per zom-bee] -noun a. flesh eaters with super powers. 2. Super -Zombies [soo-per zom-bees] -noun, plural a. The next BIG hit from Dynamite Entertainment! In a world filled with super-heroes, one man stands apart, Neuron, once known as Bernard Jaeger, the man responsible for saving the world, most particularly from the KHR SYNDROME. But it was this very plague which began to change the world forever, filling its population of super heroes with a deadly new hunger - a hunger for human flesh! From Dynamite Entertainment, writers Marc (Spider-Man) Guggenheim and Vince Gonzales, and artist Mel (RED SONJA) Rubi comes SUPER-ZOMBIES #1 - THE Comic Book Entertainment event of 2009! Featuring covers by Rubi, Dynamite exclusive artist Fabiano Neves and new sensation Chasen, SUPER-ZOMBIES #1 is poised to be the biggest book of 2009!