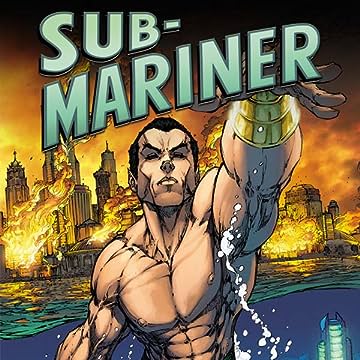 Collects Sub-Mariner (2007) #1-6. The King has returned! Fresh off of his key appearances in CIVIL WAR and WOLVERINE, Marvel’s first mutant returns in his own series that will forever change the way we look at Namor and Atlantis. A horrendous terrorist attack has struck the U.S., and all clues point to an Atlantean sleeper cell’s involvement. Now, Namor and Atlantis find themselves in the crosshairs of S.H.I.E.L.D. But is Namor to blame for the attack? Or is this just the first strike in a dark coup orchestrated by those within Atlantis who would see Namor stripped of his title and his kingdom? The half-human, half-Atlantean son of two worlds must now race between the sea and the surface to track down those responsible for the attack before Tony Stark, Director of S.H.I.E.L.D. – a.k.a. Iron Man – takes him down! Written by Matt Cherniss and Peter Johnson (POWERLESS) with art by the internationally acclaimed Phil Briones (WHITE TIGER)!