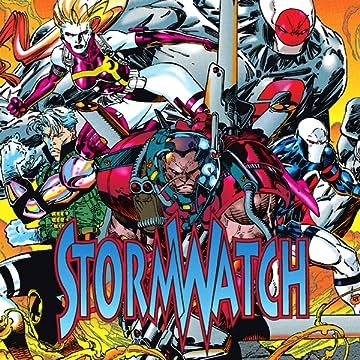 They are StormWatch, the world's most elite anti-terrorist super powered strike force. There's Battalion, field commander, empowered with psionics and armed with a battlesuit that gives him the firepower of his namesake. Fuji is a mountain of a man from Japan whose super human strength is only matched by his great heart. Diva is a South American beauty with alabaster skin and a scream that can literally shatter steel. Hellstrike is super-fast and can project powerful force bolts. Winter, a hero from Russia, can absorb and manipulate massive amounts of energy. And residing over them all, high above in the orbiting space station Skywatch, is the Weatherman, a cybernetically enhanced commander with eyes all over the world, ever vigilant and uncompromising when it comes to planet Earth's safety. When Battalion's younger brother gets caught in the crossfire in a battle between StormWatch and their malevolent counterparts the Mercs, the young man's life will never be the same again.