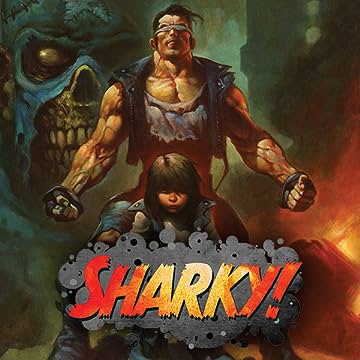 Sharky is 16 years old. All his life, he's been raised by his mom, with no idea of who his father was. Now he's hit puberty, only to discover that the "no-good-S.O.B." who contributed to his genes is none other than ODIN - not to mention his mother is a child of ZEUS! Whenever something sets off his hormones, he transforms into the demi-god SHARKY - complete with a body The Rock would kill to have - and the strength of a superman! When two of his long lost 'relatives' visit Earth and decide to create havoc by raising the dead, Sharky has to pick sides, with the fate of the planet at stake. With no time for training, it's a case of working out Superhero 101 as he goes - and if he fails, his friends' lives are forfeit! With guest appearances from indie comics favorites THE MASK, VAMPIRELLA, SAVAGE DRAGON, MILK & CHEESE, MR MONSTER and FLAMING CARROT!