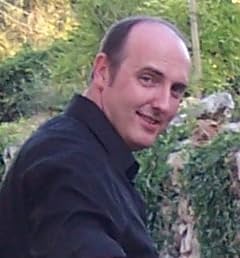 Richard won the BBC Writersroom opportunity in 2012 and was one of a handful of writers selected for NBC Universal's Development Initiative in 2015 and again in 2016.

He is also currently developing his first original IP with Legendary Entertainment and writing for the third series of THUNDERBIRDS ARE GO! for ITV and Amazon Studios.

Richard is the lead writer on Titan Publishing's 12th DOCTOR range of comics and works on the BBC's line of best-selling DOCTOR WHO books - most recently "Myths & Legends". Richard also has many DOCTOR WHO audios scripts and works of non-fiction to his name.

He was Lead Writer on the Disney Hungama show EENA MEENA DEEKA and staff writer on the BBC's BAFTA Award-winning TREE FU TOM.

He has a track record in developing shows for existing IP and is also developing his own projects: NO KIDDING – a workplace drama cantered around a group of nursery school workers and THE LAST HORSEMAN – a fantasy drama that takes a look the Horsemen of the Apocalypse from a different angle.

A judge for the Children's BAFTA Awards, Richard also writes prose and audio scripts for MGM's STARGATE SG-1 and Sherlock Holmes – including adapting THE HOUND OF THE BASKERVILLES and writing his own stories for Titan Publishing's range of books.
Website: http://www.richarddinnick.com
Twitter: http://www.twitter.com/@richarddinnick