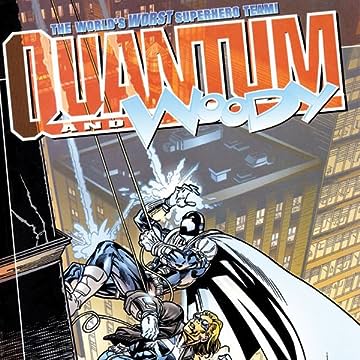 Quantum and Woody are the world's worst superhero team! Eric Henderson is a decorated Army tactical officer. Each move he makes is planned with precision. Woody Van Chelton is a goofy white guy with a guitar (but no band). His idea of detective work is hanging a suspect out a window. Investigating the suspicious deaths of their fathers, they become victims of a high-tech industrial accident that turns their bodies into pure energy. The metal gauntlets they each wear must be slammed together every 24 hours to reset their energy matrix-- or their atoms will break apart. Eric adopts the codename 'Quantum' to find his father's killer. Woody wants avenge his father's death too-- but he'll go by Woody. Can they solve the mystery without strangling each other-- or destroying the world?