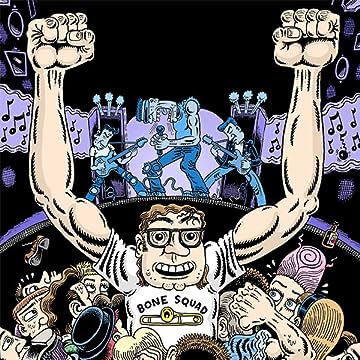 It was a time when the American Dream was caked in rust, hormones raged, music actually mattered and the one thing that meant more than any other was: ESCAPE! PUNK ROCK & TRAILER PARKS, by Derf Backderf, takes place in recession-ravaged Akron, Ohio, in 1980, at the peak of the Rubber City's unlikely and lively punk rock scene, a pop culture phenomenon that spawned distinctive acts such as Devo, Chrissie Hynde of the Pretenders and so many other groups that Melody Maker referred to Akron as "the new Liverpool." The story follows the triumphs and travails of one colorful young man, Otto, who lives in the family-owned trailer park on the outskirts of the Rubber Capital. He backs into the punk counter-culture by chance and through talent, wit and sheer force of personality soon becomes a local star. Otto chases fame and love and has memorable encounters with punk luminaries such as the Clash's Joe Strummer, Wendy O. Williams of the Plasmatics and rock scribe Lester Bangs. PUNK ROCK & TRAILER PARKS conjures up the oppressive insanity of growing up in the Rustbelt, the day-to-day weirdness of the trailer parks tucked away therein, the magic allure of sex and the necessary comforts of friendship, the mystical power of the counter-culture to turn outcasts into heroes and, most of all, the transcendant power of music, specifically the punk rock of the late 1970's which redefined, transported, and ultimately, perhaps, disappointed a generation. It's a tale as gritty, raucous and bawdy as punk music itself. PUNK ROCK & TRAILER PARKS is an evocative, hilarious, and ultimately poignant book that will appeal to anyone whose youthful dreams live on.