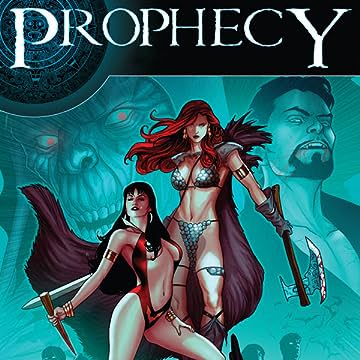 In 2012, the Mayan doomsday prophecy is coming to pass, and the end of the world makes for strange allies. Vampirella, Red Sonja, Kulan Gath, Dracula, Eva, Herbert West The Re-Animator, Alan Quatermain, Athena, Dorian Gray, Purgatory, Pantha and many more choose sides and clash in battles that will decide the fate of the Earth and all of mankind. Will the forces of good be able to stop the end of days? Or will an army of darkness rise? A seven-issue, SELF-CONTAINED event! That's right, fans, no spinoffs, no add-ons, just seven issues of all out, apocalyptic warfare! Be there for the first crossover spanning the Dynamite line...before it's too late! DYNAMITE'S MOST POWERFUL AND AMBITIOUS CROSS-OVER EVER!