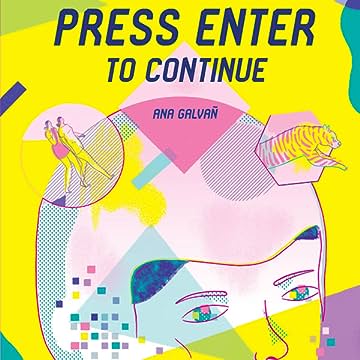 Spanish cartoonist Ana Galvañ charts an often-psychedelic and existential course for modernity in her English language debut, utilizing swaths of electric and florescent colors to create a series of short stories that intertwine and explore the dehumanizing effects of contemporary society. Like a candycolored collection of Black Mirror episodes, Galvañ’s world, set in the very near-future, is familiar and cautionary at once. Galvañ’s unwitting and addictive characters navigate a world of iridescent pastels and geometric energy like puppets. Departments of inhumane resources dehumanize the people it is purported to protect; information is determinedly mined like the gold of the 21st century that it is; induced suicidal thoughts are a tool to manage overpopulation. Galvañ’s near future is less paranoid dystopia than it is a logical extension of things to come, where the malice of large corporations manifests in small, everyday ways—real if a bit surreal at the same time.