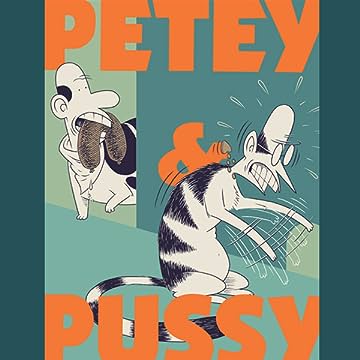 Petey and Pussy, John Kerschbaum's new graphic novel, reads very much like a Looney Tunes cartoon―if all of the anthropomorphic animals were kvetching, balding, foul-mouthed misanthropes. Each character is articulate (and, in fact, can speak directly to humans, well enough to order a beer) but still recognizably have the traits associated with their respective species: Pete, the dog, is happy-go-lucky; Pussy, the cat, is self-centered; and Bernie, the bird, is high-strung and constantly a-twitter. Together, they are the pets of a sweet old lady whose obliviousness to the lunacy unfolding around her is second only to her own hygienic repugnance. The Sisyphean struggles of the characters is brought to the fore―the cat is compelled to try and catch the mouse, the bird struggles to escape his cage―as the trio engage in slapstick adventures that are simultaneously given an edge and made hilarious by a twisted combination of mundane realism and insouciant gross-out humor.