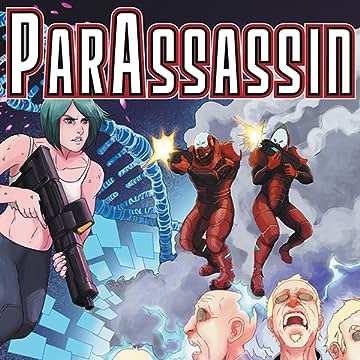 Three futures hang in the balance. Two end in total annihilation. One assassin's bullet will decide. On the planet Sedulon, a rogue band of renegade time travelers and scientific misfits fight to save the futures of two worlds. Doc Hydrabus - a brilliant scientist whose body splits into a crowd of his past and selves, he lives in one present and many futures all at the same time. Cassindra - 900 years old, impossible to kill and every bit as deadly as she is beautiful. She's travelled back in time to change the world. Rushaar and Shartara - alien beings made entirely of gas with one simple plan, to use time travel to assassinate the leader of Sedulon and save their planet Eidolonia. The Parassassin - he will take the shot that decides the destinies of everyone in the galaxy. Politics and parody collide on the bleeding edge of science fiction, in the most shocking and unexpected thriller you're going to read this year.