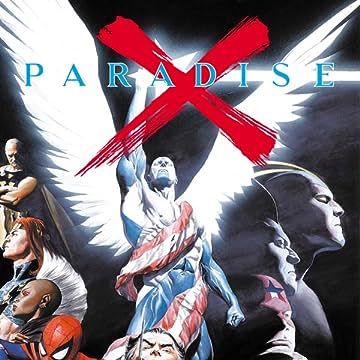 Collects Paradise X #0-5, Paradise X: Xen And Heralds #1-3. In EARTH X, Captain America, the Fantastic Four, Thor, the Hulk and the X-Men discovered that their purpose - and the meaning of all super heroes and mutated people in the universe – was nothing more than to protect their host planet, in this case Earth, from outside invasion. They learned super heroes are merely biological antibodies to protect a growing embryo within the Earth. An embryo for the Celestial race: This is the way these Gods fought back – only to cause a terrible ecological imbalance, a rift at its core that in time would wipe out all life on the planet. In UNIVERSE X, Captain Marvel was reborn on Earth years after his death. But he also still claimed to walk in the realm of the unliving, where Earth's fallen champions still exist. Mar-Vell led a team of heroes in a quest for the greatest weapons of mass destruction on Earth, suggesting this would limit the destruction caused by the growing power struggle on the planet. But this was not the only reason. For his crusade on Earth only supported and armed a battle he fought in the realm of the fallen, a battle against Death herself. Those living champions who died in his collection of artifacts were added to the battle raging in this other realm. Mar-Vell led a charge against Death and killed her. But now that Death is dead, no one will ever die again. They may writhe in pain in hospitals because their bodies have been broken beyond repair, but they will not die. They will call out for an end to their suffering. They will cry out for peace but there will be no answer. Paradise will be denied them. Yes. Death is truly dead. Long live the living.