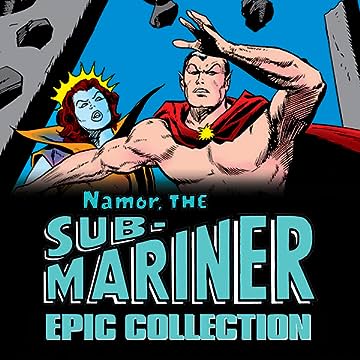 Collects Fantastic Four (1961) #4, 6, 9, 14, 27, 33; Fantastic Four Annual (1963) #1; Strange Tales (1951) #107, 125; Avengers (1963) #3-4; X-Men (1963) #6; Daredevil (1964) #7, Tales to Astonish (1959) #70-76. Marvel proudly presents Namor the Sub-Mariner's early Silver Age appearances, all collected together for the very first time! An icon of comics' Golden Age, the Sub-Mariner hadn't been seen for nearly a decade when Stan Lee and Jack Kirby reintroduced him in 1962. Bold and brash, the Sub-Mariner fought Marvel's heroes, allied with Doctor Doom and attacked the surface world just as readily as he might save it! After several memorable adventures, Namor graduated to his own TALES TO ASTONISH serial — and began a quest for the Trident of Neptune to prove his status as rightful heir to the throne of Atlantis!