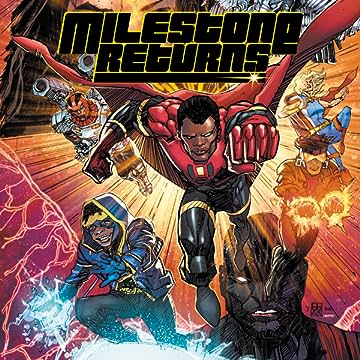 "At long last - the return of the legendary Milestone Comics imprint has kicked into high gear! This jumping-on point chronicles the events of the Big Bang - the police-brutality protest gone wrong that changed the face of the city of Dakota forever, by unleashing a wave of superpowers across its population! As the world watches, a bullied teenager will become the hero known as STATIC... a framed scientist will go on the run as the superweapon HARDWARE... and a stranded alien will meet an ambitious young woman who will transform his life, and remake the pair as the all-powerful ICON & ROCKET! The original Milestone changed the face of superhero comics forever, introducing the industry to a wave of Black talent who still shape the conversation... and the new Milestone intends to raise the bar! Get on board here!"