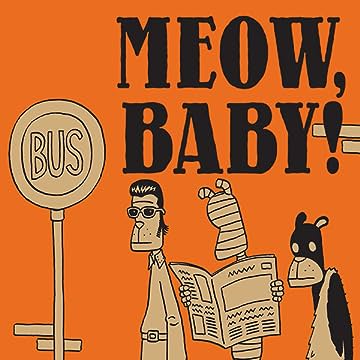 In this collection of hilarious shorter pieces, Jason unleashes his inner Scandinavian goofball. God, the Devil, mummies, vampires, zombies, werewolves, reanimated skeletons, space invaders, Death, cavemen, Godzilla and Elvis populate these most often wordless blackout gags, side by side with Jason's usual Little-Orphan-Annie-eyed, rabbit-and-bird-head protagonists - a "lighter side" of one of the best cartoonists of the new millennium. "The protagonists of Jason's funny stuff [in Meow, Baby!], like those of his graphic novels, are tall and thin with animal heads. They include a reanimated mummy, zombies, a vampire, a Frankenstein monster, an angel, a devil, a werewolf, and other monster and science fiction movie icons, whose eldritch auras suggest a noirishly oppressive atmosphere. Meanwhile, the comedy they play out, usually wordlessly, is the whimsical, fanciful, incongruous stuff of physical comedians from Chaplin to Gleason. Jason presents them in the deadpan, no-frills manner of Ernie Bushmiller's bedrock comic-strip classic, Nancy." - Booklist