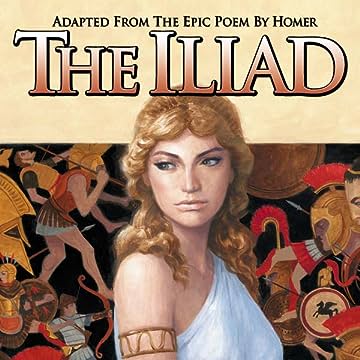 Collects The Iliad #1-8. Whether its author was truly a blind poet named Homer, who also composed The Odyssey…or whether the epic poem grew over a period of several centuries, added to by many men and perhaps women… is not known. And probably never will be. Yet it remains, after many centuries, one of the greatest war stories—no, one of the greatest stories—in all of literature. A tale of war between the Achaeans (Greeks) and the besieged Trojans over the fate of Helen, the most beautiful woman in the world…a test of wills between the fabled warrior Achilles and the war chief Agamemnon… with a climactic battle between Achilles and Hector, the foremost defender of Troy. A saga of gods and men, each possessed of grand desires…and all too human failings. The Iliad is both a whirl of scarlet action—and of the equally violent emotions that rule mankind.