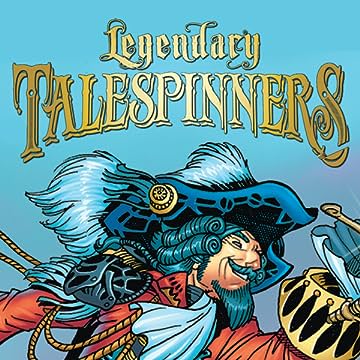 If you enjoy 'Fables', 'Stuff of Legend' and other great new stories, you will enjoy Tales of the Legendary Talespinners! From the dawn of creation there have been storytellers spinning timeless fables and folktales. Call them historians, poets, philosophers, or charlatans, it was their fanciful re-tellings of the age of wonder that kept children enwrapped in fantasy and immersed in imagination. But over the last two centuries something dark has been devouring the storytellers and even the stories themselves, leaving children with dulled imaginations and no will to believe in giant killers or wicked witches. Abby was one of those children and is now a young woman who still lives only in the concrete reality of her professional ambitions. Raised by a mother who had no time for 'childish pursuits,' she grew up too fast and locked her fertile imagination away forever. But Abby's orderly world comes crashing down upon her when a crazy old man who believes himself to be the real Baron Munchausen leads her into a festering fantasy world facing villainous henchmen, zombified fairytale creatures, and the most unlikely wickedest witch of them all. Dynamite Entertainment proudly presents an event that reshapes how we look at fables and the imagination! Written by James Kuhoric (Dead Irons/Freddy vs Jason vs Ash), illustrated by Grant Bond (Igor/Trick R Treat), and art directed by Nick Bradshaw (Danger Girl/Army of Darkness).