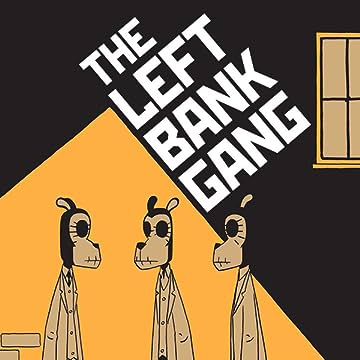 F. Scott Fitzgerald, Ernest Hemingway, Ezra Pound, and James Joyce walk into a Parisian bar... no, it's not the beginning of a joke, but the premise of Jason's unique new graphic novel. Set in 1920s Paris, The Left Bank Gang is a deliciously inventive re-imagining of these four literary figures as graphic novelists! Yes, in Jason's warped world, cartooning is the dominant form of fiction, and not only do these four literary giants work in the comics medium but they get together to discuss the latest graphic novels from Dostoevsky to Faulkner ("Hasn't he heard of white space? His panels are too crowded!"), and bemoan their erratic careers. With guest appearances by Zelda Fitzgerald and Jean-Paul Sartre, and a few remarkable twists and turns along the way, and you've got one of the funniest and most playful graphic novels of the year. Like Jason's acclaimed Why Are You Doing This?, The Left Bank Gang is rendered in full spectacular color. "Cross Ingmar Bergman with Walt Kelly and Raymond Carver and you may have some idea of what Norwegian cartoonist Jason's work is like... one of the medium's finest storytellers." - Publishers Weekly