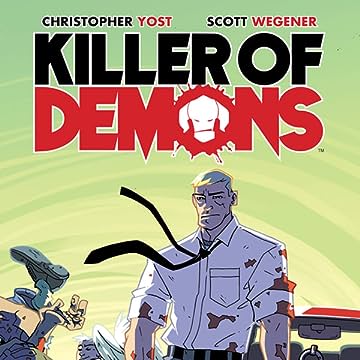 Collects KILLER OF DEMONS #1-3 plus bonus materials! Collecting the critically acclaimed mini-series from the writer of Marvel's X-Force and the artist of the Eisner nominated Atomic Robo! Hell has invaded Earth and only one man can stop it... junior account executive Dave Sloan, aka the Killer of Demons! With an angel at his side, Dave can see the demons that have infiltrated our world... and they all have to die! But these 'demons' are mostly Dave's co-workers, or people that annoy Dave in some way, leading him to believe that he's gone totally insane. Or has he? Dave has to fight to survive and find out the truth... is he a whacked out mass murderer, or the last hope the world has against the forces of Hell?