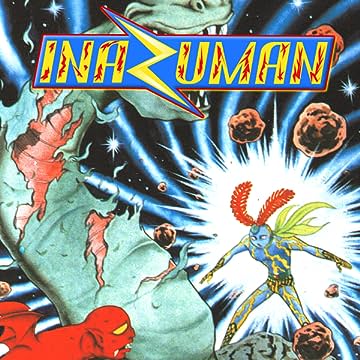 SABURO KAZEDA is an average school boy, but after he is attacked by the advance guards of the Neo-Human Empire on the way home from school, he starts to develop supernatural powers! The Neo-Human Empire is an organization of mutants with superpowers who plot to turn the world into a place dominated by their own kind, eliminating any homo sapiens that are not mutated. For the mutants of the Empire, homo sapiens are merely 'ancient humans who have not evolved.' The Empire's attacks on humankind awaken the mutant powers hidden inside Saburo. Discovering Saburo's astonishing supernatural powers, the Empire pressures him to join their ranks, but he refuses. The righteous Saburo determines to fight the Empire for the sake of all humankind, using his powers for justice. As he changes into a butterfly-like figure--"the MUTANT INAZUMAN"he finds that he can control lighting and electricity! Inazman must develop his mighty supernatural powers and take a stand against the Neo-Human Empire. As the evil powers and righteous powers clash together and spark, a furious battle for the survival of mankind begins!