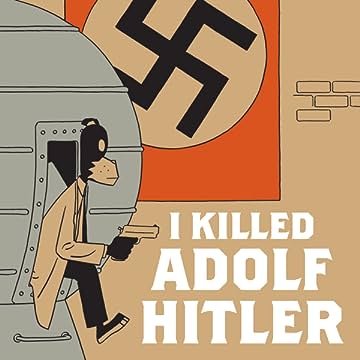 50-Pages! In this full-color graphic novel, Jason posits a strange, violent world in which contract killers can be hired to rub out pests, be they dysfunctional relatives, abusive co-workers, loud neighbors, or just annoyances in general-- and as you might imagine, their services are in heavy demand. One such killer is given the unique job of traveling back in time to kill Adolf Hitler in 1939... but things go spectacularly wrong. Hitler overpowers the would-be assassin and sends himself to the present, leaving the killer stranded in the past. The killer eventually finds his way back to the present by simply waiting the decades out as he ages, and teams up with his now much-younger girlfriend to track down the missing fascist dictator... at which point the book veers further into Jason territory, as the cartoonist's minimalist, wickedly dry sense of humor slows down the story to a crawl: for long patches absolutely nothing happens, but nobody can make nothing happening as riotously entertaining as Jason does... and finally, when the reader isn't paying attention, he brings it together with a shocking, perfectly logical and yet completely unexpected climax which also solves a mystery from the very beginning of the book the reader had forgotten about. As always, I Killed Adolf Hitler is rendered in Jason's crisp deadpan neo-clear-line style, once again augmented by lovely, understated coloring.