Flayed Corpse and Other Stories 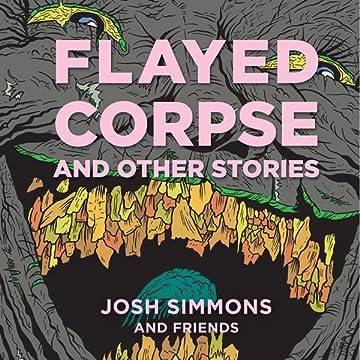 Flayed Corpse and Other Stories

DISCLAIMER: gore
This is a blackly comedic take on horror tropes―a backpacker arrives in a strange town, a man and his dog delve into some mysterious woods―in the form of atmospheric short comics. Flayed Corpse and Other Stories contains more than two dozen of examples of Simmons’s deft voice and vision. The individual stories in Flayed Corpse stand on their own as minimasterpieces of skin-crawling terror, but collectively complement each other in a way that only heightens the anxiety and dread pouring from page to page. Flayed Corpse also collects several collaborations between Simmons and other cartoonists, including James Romberger, Anders Nilsen, Tara Booth, Eroyn Franklin, Tom Van Deusen, and Eric Reynolds, amongst others.