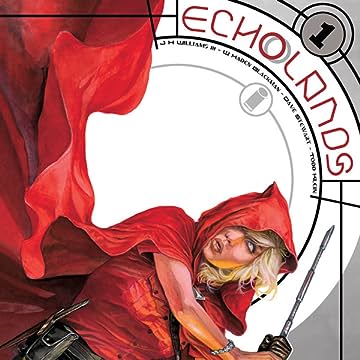 A MAJOR IMAGE COMICS 2021 EVENT! The story of Earth’s last war starts with Hope’s sticky fingers… The multiple award-winning Batwoman team, J. H. WILLIAMS III (Promethea, The Sandman: Overture, Batman) and W. HADEN BLACKMAN (Star Wars, Elektra), reunites for an all-new ongoing series! They’re joined once again by colorist supreme DAVE STEWART and master letterer TODD KLEIN. In a bizarre future world that has forgotten its history, a reckless thief, Hope Redhood, holds the key to excavating its dark, strange past—if only she and her crew can escape a tyrannical wizard and his unstoppable daughter. But fate will send them all on a path leading to a war between worlds. ECHOLANDS is a landscape format, mythic-fiction epic where anything is possible—a fast-paced genre mashup adventure that combines everything from horror movie vampires to classic mobsters and cyborg elves, to Roman demigods and retro rocket ships. It’s going to be a helluva ride! Each issue of the series will offer a Raw Cut edition, featuring the art from J. H. WILLIAMS III as it looked leaving his work studio. Early praise for ECHOLANDS: “It's every fictional world, each with its own artistic style, intersecting and exploding with JHW3 magic and crackle. I can't wait to see where he and Haden Blackman are taking us—into a world in which anything can happen, and undoubtedly will.” —Neil Gaiman "So complex and unique and expertly executed it pushes the medium forward in new directions and leads to invigorated interest in the medium of comics itself." —Robert Kirkman "A dazzling, kinetic ride through an exquisitely realized fantasy world, bursting with graphic energy and excitement." —Dave Gibbons “Echolands’ fallen fantasy San Francisco is painted as a monstrous blend of magic and technology, and reads like a blockbuster car chase.” —Kyle Shutt (The Sword) “Getting an eyeful is a massive understatement. I love looking at the drawings as they expand with more details emerging every time I look.” —Debbie Harry (Blondie, Face It: A Memoir)