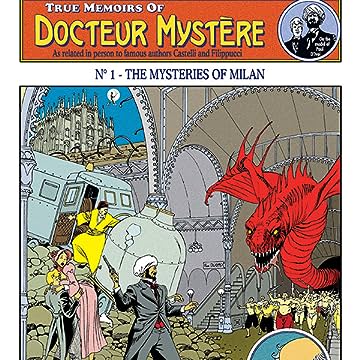 The famous stiff rakes, Docteur Mystère and his heroic assistant Cigale, are shot at the moon in a cave projectile. First, they'll set foot on it. But on board, they're stuck with a stowaway. The handsome Lady Rowena is looking for her missing fiance who she knows is on the moon. Oermacho Mystère decides not to defy this woman's logic because on the moon a welcome committee of strange creatures awaits them. A little further on, by a red-and-white checkered rocket, lies the corpse of a white fox terrier. The drawings are a true tribute to the naïve adventure tones of the early 20th century, and seem to have run away from Jules Vernes adventure books. A smiling moon, false perspectives, the main characters that Blake and Mortimer-wise always and everywhere keep their composure and phlegma,... make the strip seem wonderfully dated. The contrast with the bone-dry humour and the many persiflages (Star Wars, Alien, Mars Attacks, Star Trek, Goldorak,...) is all the stronger. But despite this crassness, The War of the Worlds remains a very consistent story full of brilliant dialogues.