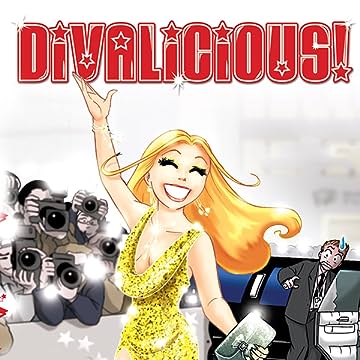 Divalicious! follows teenage pop princess Tina Young in her endless pursuit of fame, aided by her hapless personal assistant, Shaquille. It’s a coming-of-age story set in the stranger than fiction world of modern American music—where glamour and fame can come overnight, but maturity often proves much more elusive. For our heroine, Tina, it’s all about overcoming the odds (think Lucille Ball meets Kelly Clarkson). She’s up against the likes of the sleek and beautiful Bit Fencer and the shadowy, Machiavellian music corporation A Few Notes. However, not all of Tina’s obstacles come from outside forces. Her own unbridled enthusiasm and leap-before-you-look attitude often land her in hot (albeit hilarious) water. Tina is the lovable underdog, a girl from a decidedly unglamorous background, who’s traded in her love of music for an all-encompassing quest for fame. Part of the joy of Divalicious! comes from following Tina’s missteps as she stumbles down the road to both artistic and personal fulfillment. Throw into the mix over-top-personalities like Tina’s “sometimes” band mates The Rrrrestless, Tina’s strategically placed “boyfriend,” Chad—and possibly the biggest loose cannon of them all, Tina’s self appointed #1 fan, Stephina—and well, let’s just say that hilarity most definitely ensues.