Deadworld: War of the Dead 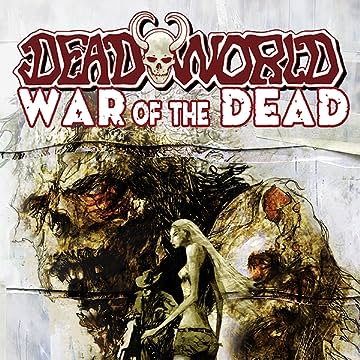 Deadworld: War of the Dead

The zombies have over run the Earth! A small outpost, remnants of a twisted scientist’s scheme to defeat the plague holds out against the army of King Zombie. Their secret weapon are the Lepers---victims of a bizarre experiment that left them with dead skin in breathing husks with flesh that even zombies won’t touch. It is a war of intelligence versus primal instinct---the will to survive against the craving for flesh. THIS ISSUE: The small outpost known as Safe Haven continues to hold out against constant zombie attacks. Led by Rand, the leper who was a victim of brutal experiments, hope continues to dwindle with each battle. Donna arrives and it is revealed she is half-human and half-zombie. The King Zombie has Deake but is Deake a madman or does he hold the secret to the rise of the dead? The continuing critically acclaimed saga that is Deadworld. "This is a fantastic zombie book. Makkonen has an insanely terrifying style, the writing is beautiful…it’s like reading a nightmare." - Drunk on Comics.