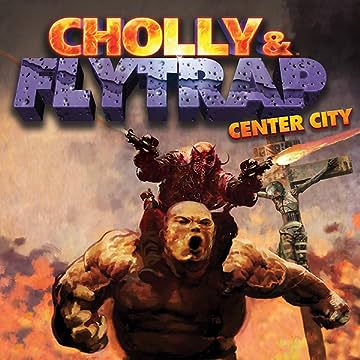 Sin City-style frantic pacing, grim tension, intrigue and edgy humor abound in this creative masterpiece. Set in a wacked-out world, Center City is the belly-button lint of surviving society, a final human outpost oozing crime and tension between man and machine. Against this backdrop, comicdom's most unique anti-heroes, Cholly and Flytrap, find themselves knee-deep in a mucky feud between the city's two power brokers: the Siamese-twin Hobbs Brothers and paranoid paraplegic millionaire Ameil Luvitz. When sumo-master Flytrap is mistakenly shanghaied and forced into slavery in a secret fight world, his partner Cholly's odyssey to rescue him from certain doom begins. A groundbreaking and compelling epic told by the ultimate storyteller!