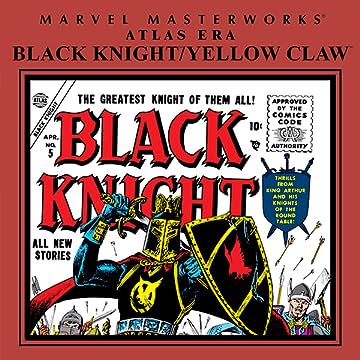 Collects Black Knight (1955) #1-5 & Yellow Claw #1-4. From the heroic times of King Arthur to the dangers of the Cold War, the Atlas Era brings you the greatest adventure stories from the 1950s. Presenting the original series of two legendary characters that have bridged the decades – all the way from the Atlas Era to the Avengers and Agents of Atlas – Black Knight and Yellow Claw are must-haves for every Marvel maniac! Sir Percy of Scandia may appear to be a foppish weakling, too timid to fight and the scorn of Camelot, but only Merlin knows the truth: Sir Percy is the gallant Black Knight! Come to drive Modred de Monfort from King Arthur's court, he wields the ebony blade against Norman invaders, dragons, imposters and usurpers to the throne. With the pencil of Atlas great, Joe Maneely, delineating the action,Black Knight is a sure-fire classic! Then comes Cold War tales of mystery, espionage and world domination from the pages of Yellow Claw! Illustrated by the incomparable trio of Joe Maneely, John Severin and —in a rare mid-50s Atlas appearance— Jack Kirby, F.B.I. Agent Jimmy Woo's mission to capture the century-old mystic from the root of the Himalayas is packed with gritty crime and unimaginable adversaries, from mind-bending mutants and UFO the Lightning Man to Temujai the Golden Goliath and the Living Shadows!