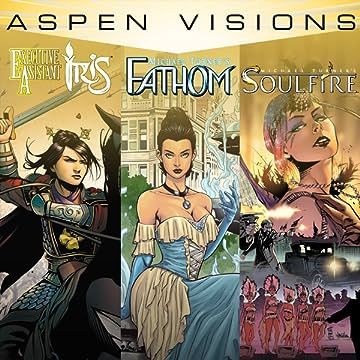 In the tradition of DC's Elseworlds and Marvel's "What If?" classic stories comes Aspen's most mind-bending concept ever—ASPEN VISIONS! It all begins here in a special three part mini-series spanning across Aspen's most popular titles—Fathom, Soulfire and Executive Assistant Iris! Journey through time and reality beginning in the pages of Executive Assistant: Iris, as the preeminent heroine Iris emerges in Ancient China in the middle of a deadly war! Just how does this battle from the past—and Iris--merge into the Fathom and Soulfire universes? You'll have to discover for yourself in the pages of this three-issue event and the pulse-pounding launch of the all-new ASPEN VISIONS line of books that will shatter everything you know about Aspen's most popular characters!