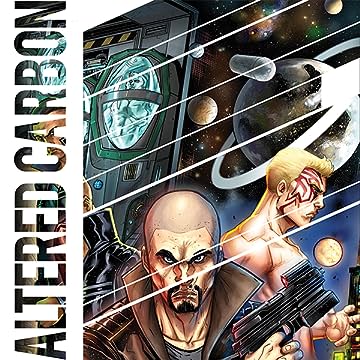 In the distant future, the human body is a temporary and interchangeable commodity - if you can pay. For the interstellar elite, bodies are swapped out and reused without a second thought. You never grow old; you never die. However, some bodies are more temporary than others ... Takeshi Kovacs was once a member of the Envoy Corps, stormtroopers for the Interstellar Earth Protectorate, ultra-lethal adepts in switching bodies across the stars. While he served, he was known by a variety of names--Mamba Lev, One Hand Rending, the Icepick--all testament to his capacity for rapid response and extreme violence in whatever flesh he wore. Now he's out of the service and trying to live a different life. But the Protectorate hasn't changed its spots, no matter what world Kovacs drifts to, and with that old combat rage still burning deep inside him, will he ever really be able to walk away? Created by Richard K. Morgan, Altered Carbon was previously adapted as a Netflix television series. This original graphic novel, written by Rik Hoskin (Brandon Sanderson's White Sand/Pierce Brown's Red Rising, expands upon the Altered Carbon universe.