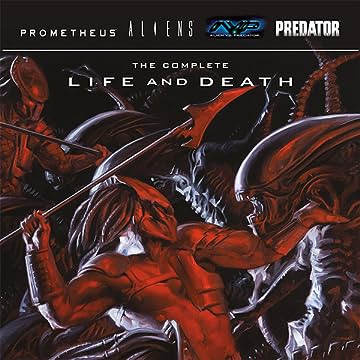 It's a battle for survival against the three deadliest species in the galaxy! For Captain Paget and her platoon of Colonial Marines, a routine mission for the Weyland-Yutani Corporation becomes a running battle that will carry them halfway across the galaxy in a fateful four-way war. A fateful encounter with a tribe of the interstellar hunters known as the Predators--who are after the same prize as Weyland-Yutani: a seemingly derelict spaceship belonging to the god-like Engineers from the film Prometheus. But the ship is far from abandoned, and the Engineers move the battle to LV-223--where Paget and her team encounter the survivors from Dark Horse's Fire and Stone story cycle (2014), which leads all of them to a collision course with an army of Aliens! From sci-fi military action, to a confrontation with the most personal horror imaginable, Life and Death delivers all of the excitement fans of 20th Century Fox's monster franchises demand!